That Summer, the Clark Regional Emergency Services Agency hosted a summer book club on Amanda Ripley’s book, The Unthinkable.  This book is an incredible read as it describes a number of “disaster personalities” and the way people respond during crisis situations.  Ms. Ripley challenges traditional emergency preparedness recommendations and suggests that disaster resilience is a set of behaviors that include awareness, meditation, flexible thinking and good health.

During the course of our summer book club, the messages shared among participants was loud and clear.  Emergency Managers spend a great deal of time preaching the preparedness message, but never listen to whether the community is actually preparing. 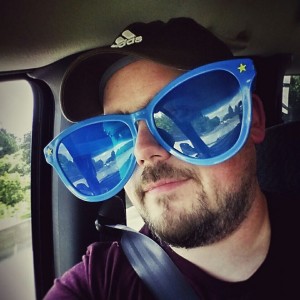 Simultaneously, the guy in the picture up there? He was hosting a social media game called “Spot the Ham Sandwich” in which he posted a reference to ham somewhere on either his website, Facebook Fan Page or on his Twitter profile.  Now, Jason Hillard works with mortgage loans and I wasn’t in the market for a loan.  But in playing in his online game and seeking out his daily hidden clue, I learned more about loans of all varieties.

On August 31st, the day before the start of the 2010 National Preparedness Month, it struck me driving to work……what if we asked people to actually complete preparedness tasks and made it fun?  Could it work?  Would people engage?

30 days later, we had over 600 preparedness tasks completed by over 80 participants.  The message was clear to us.  We just had to ask.  In the coming days, we’ll share more about that experience and the specific statistics.  But tonight we want to ask……are you willing to engage and do just one thing each day in September.

There will be a number of ways to get game information: